I’ve heard it said in regards to planning a climbing trip that “if you wait for the right weather before you climb, you’ll always be waiting”. This last trip to Cochise Stronghold has proven the wisdom of that saying. As a guide and as a recreational climber I try to pay attention to weather forecasts to avoid dangerous and uncomfortable weather. Professionally and personally I attempt to distinguish the difference between the two. Dangerous weather is life threatening. Obvious examples of this weather would be tornados, lightning storms, blizzards, etc. Uncomfortable weather is entirely dependent on personal preference and clothing/gear available on hand. Common examples are too hot, too cold, or too wet.

On a personal note, having a wife and children have limited the amount of time that I have free to go climbing for myself. For that reason I have altered my personal tolerances for “uncomfortable weather”. I climb in Phoenix, AZ through our triple digit summers not because I find it the most pleasant of weather:) but because it may be the only time that I have. Yet when you consider these temps it begins to create a fine line between “dangerous” and “uncomfortable” weather. To not be adequately prepared for these temps can in fact be life threatening. Being uncomfortable will never kill someone but dehydration can. I prepare meticulously for this by limiting exposure to direct sun ( I climb in the shade), during these temps I carry copious amounts of water (I keep track of my water consumption making certain I don’t run out of water), and I always carry a cell phone, a way to charge it, and stay within range of cell towers.

I bring up this example of the weather in Phoenix, AZ to demonstrate that the lines of dangerous weather and uncomfortable weather can be difficult to distinguish. So when attempting to differentiate between the two don’t forget to consider the worst possible scenarios so that you can pack the equipment essential for survival of not just you, but your partner as well. Also be certain to consider the terrain including, but not limited to, elevation, weather patterns, hazardous road conditions (flooding washes, ice patches, muddy conditions that may make vehicular travel not possible), distance to emergency medical services, cell service, perhaps the need for satellite communication, distance to fresh water sources (even if it is a gas station). This may require a great deal of research on your part but I promise it is not wasted time and it will be a huge benefit to you, your adventure partners, and both of your loved ones.

When planning my most recent adventure to Cochise Stronghold (perhaps my favorite climbing area in the state of AZ) I was considering all those things discussed above and more. I was watching the weather forecast on two different sources and noticed that the night before the chance for rain increased from 50% to 75% on one of my favorite weather resources. I’m personally comfortable  planning a climbing trip when the chances of rain are 50% or less but, I am not psyched when the chances of rain approach 75%. Since the two sources disagreed I was on the fence as to whether or not to cancel the trip altogether. If it rains enough to ruin the climbing then my partner and I would be traveling in the car for 6 hours or more just to get rained on. Well I consulted with my partner and he proved to be as tenacious as my self for adventure saying, “I’m comfortable taking the risk”. We were in good company and traveling down the I-10 in pouring rain leaving Phoenix, AZ heading towards Tuscon. The navigator (me) watching the radars and weather forecasts as we approached our destination. Our hopes were quietly being tested as we drove through solid rain from Phoenix through Tuscon. As the clouds became less thick and the sunrise over the Dragoon Mountains blinded us both, our hopes were slowly being lifted like the wings of a falcon, propelling us closer to the West Side of  Cochise Stronghold.

Once parked at the trailhead, we were enamored with the Sheepshead formation being illuminated in the morning light. We did the ritual racking of the gear, discussing what to bring and what to leave. As soon as our packs were filled our legs carried us up the 1.5 mile approach to the base of the rock and we were staring up at the route “Peace Maker” looming above us. Knowing that the chance of rain was still there, we wasted no time in dividing the gear, flaking the rope, and tying our knots. I started off leading up the glassy granite face; a little discomforted by the fit of my new climbing shoes. I was able to remain balanced on the tiny crystals 130 feet up to the first set of anchors. After the anchor was set, my partner began following the pitch expertly cleaning each anchor that I placed.

I observed the direction of the wind and scanned the horizon looking for any potential rain. I saw two separate rain clouds dropping rain in  the distance but I was uncertain of their path. Once my partner arrived at the belay we both discussed  the worst case scenarios. Because we weren’t certain they would even reach us we decided to proceed up our route.

I launched up pitch two as fast as I could and my partner floated up the technical granite sequences with ease. As he was climbing I could observe the two separate rain storms and notice that one appeared to be headed straight for us. Over two hundred feet off the ground we again considered our options up or down and the risks involved in both. We both opted to continue up.

I engaged the third pitch with the determination of a starving artist craving the life giving nutrients of each climbing movement. My partner sped up following me with the speed and skill of Dale Earnhardt. The two storm systems drew closer. The wind picked up blowing our chalk and caressing our arms giving us an awareness of the rain’s imminent arrival.

With the knowledge that there was a spacious ledge with a two story tall pine tree to provide shelter we made our exchange brief and continued up the 4th pitch. Pausing below a difficult sequence I glanced over my shoulder to see just how much time I had before mother nature blasted me with her fire hose. I was pleasantly surprised to see that the clouds had changed directions parting one to the climbers right and one to the climbers left. Two more had developed in their place  but were much further away giving me the peace of mind to solve the problems that the climbing route was presenting. I made it to a small ledge 50 feet below the large pine tree and was able to breath easy with the knowledge that the rain I could see in the distance would’t be here before my partner arrived at this ledge. As he’d done before my partner cruised up the pitch nabbing the gear and once with in earshot we both exchanged the good news we both knew.

We dodged the bullet that Hurricane Rosa shot our way. Once to the anchor we blasted up to the ledge that had a huge pine tree 200 feet below the summit and waited for the next two rain storms to hit. To our delight these storm systems followed the last and totally missed us!

I’ve been told that those who “Risk big, win big”. Well we won big! The scattered thunderstorms that had between 50%-75% chance of showering us, didn’t. We drank in the views of the rolling clouds and sprawling landscape while we drank our water. The snacks tasted better than snacks normally do because of our beautiful circumstance and good fortune. My partner casted off up the final 200 feet of climbing “on-sight” with the surgical precision of a skilled practitioner.

Once on the summit we celebrated, turning 360 degrees, we were filled with the beauty of the Stronghold! 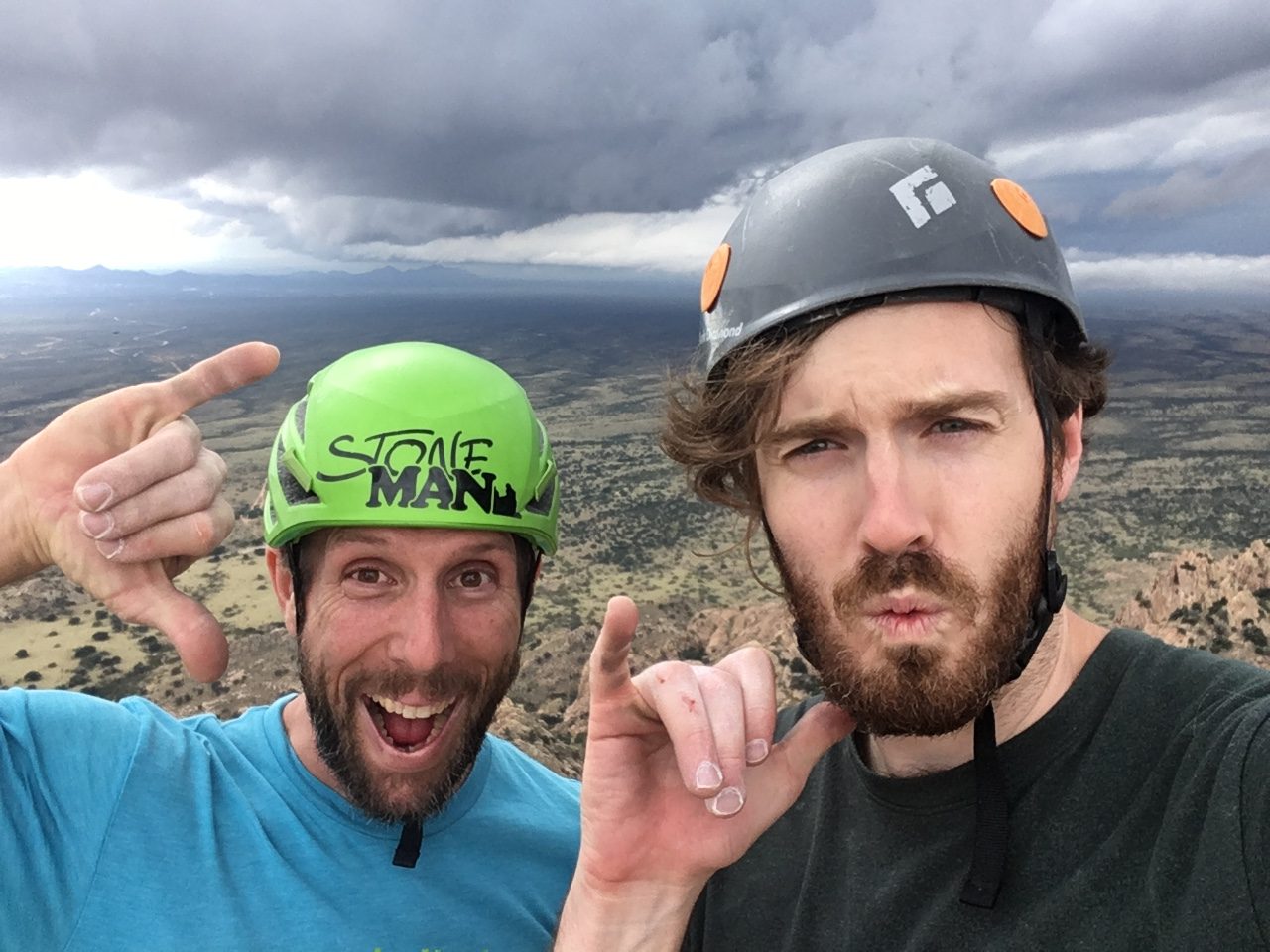 We were also able to see the black wall of clouds headed straight for us from the opposite direction. It had been obscured by the gigantic granite monolith we had just summited.

Taking time to enjoy the summit and avoid the rattle snake that I had stepped over unaware of it’s presence. It was time to get off of this dome before nature whipped out her super soaker and sprayed us down. Before we knew it our heads were literally in the clouds and the moisture of the cloud moisturized our skin, hair, and gear:) We made our way to the descent gulley sandwiched between the Sheepshead and Muttonhead formations. As soon as we were in the gulley, the mother nature pulled the trigger on her enormous oversized squirt gun and hosed us down! It was so thick and furious it obscured our ability to see the 600 foot granite walls to either side of us. Water falls erupted on the granite faces and turned into streams underneath our feet. It was a humorous dichotomy to be dodging cactus and trying not to slip in the running water:) A desert storm at it’s finest and two adventures smack dab in the middle. The only thing larger than the down pour of water were our smiles!

We made it back to our packs the clouds began to disappear allowing us to see all of the waterfalls on the Sheepshead. We could look up our route and our souls were filled with gratitude that we hadn’t had been climbing during that weather. We were quite aware that we had gotten away with something. We were so soaked we had pruny fingers. The kind you get from staying in the bath tub too long. After being in Stronghold’s hot tub for so long it was pure joy to see the sun part the clouds above and warm our skin. We laid out the gear to dry and as climbers do, got caught up in talking about more climbing.

Everything from the day’s route, to back when the first cavemen started climbing, we discussed it all. Before we knew it the rock was looking dry by about 4:30 in the afternoon. I remembered that the sunset was 6:15 and with the clouds on the horizon perhaps a bit sooner. Well it was too good to resist the idea of getting in one more climb before the end of the day. So, we hustled like a high school football team in the finals. We grabbed all our gear discussed the route all while running towards the next route. We were boogieing up the 600 foot tall “Ewephoria” (as excellent a climbing route as it’s play on words) by 5:00pm. 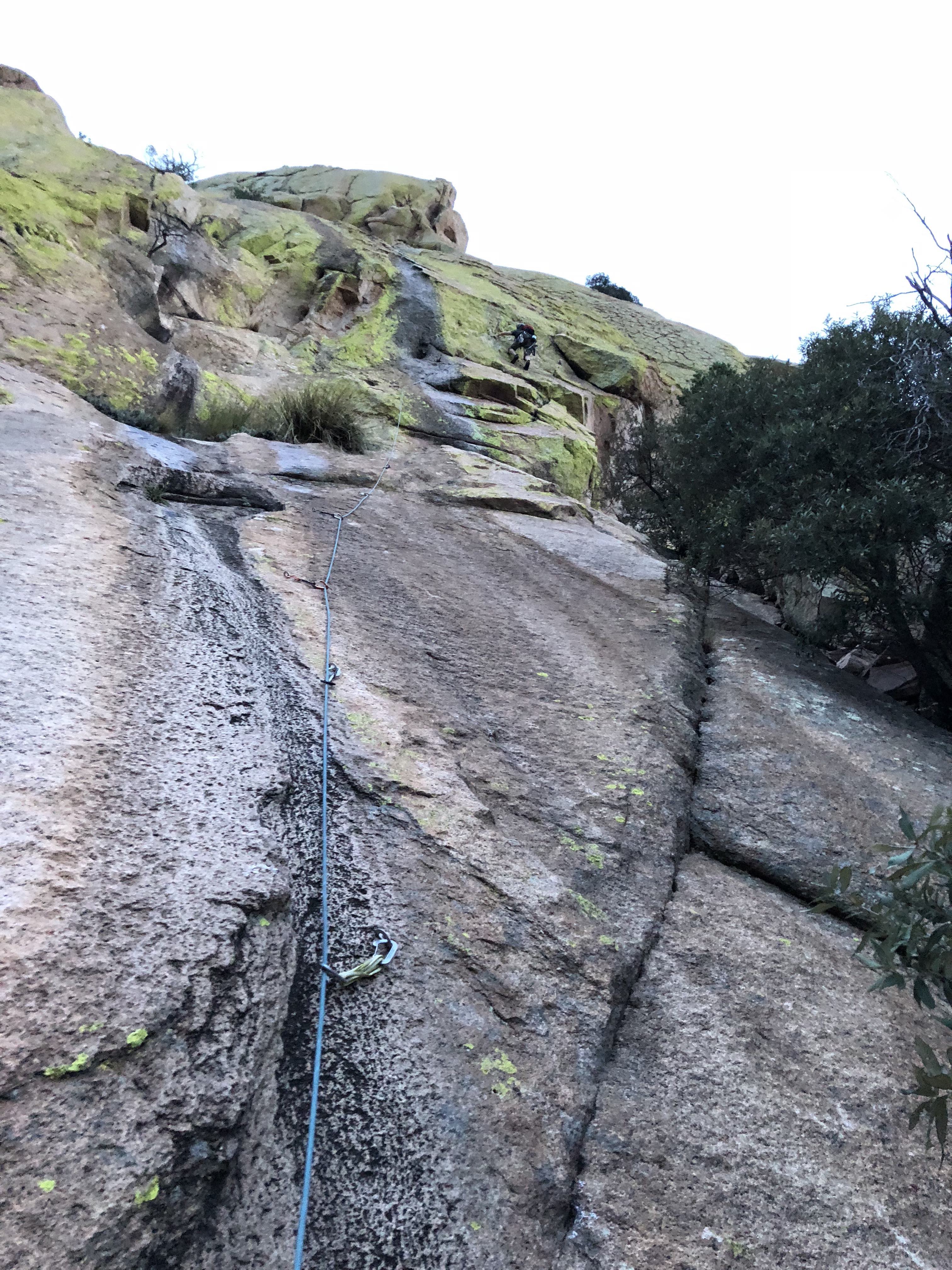 After completing the last two pitches by the light of our head lamps we were on the same summit for the second time that day by 7:00pm.

If we hadn’t taken the risk of getting rained on or climbing in the dark we wouldn’t have been able to have such a grand adventure by Yvon Chouinard’s definition.

“It’s not an adventure until something goes wrong.” -Yvon Chouinard